Travel writer and novelist Sean McLachlan sent in this interesting photo from his recent trip to Estonia. Sean writes:

"I spotted this reconstructed armor in Kiek in de Kök tower in the capital Tallinn. The city is one of the best-preserved medieval old towns in Europe, and this tower is now a museum. Before the medieval city, there was a hillfort at nearby Iru hill from the 6-11th century. Among the many finds from the excavation was this armor.

"It's what's called scale armor, an improvement on leather armor that added metal scales for extra protection. At this period, plate armor didn't exist, and even in more technologically advanced regions like France soldiers wore leather or chain mail."

Sean is the author of the Civil War novel A Fine Likeness, available in paperback and ebook. The ebook is only $2.99 at the moment.

Do you have any interesting photos to share of medieval or Renaissance subjects? Drop me a line!
Posted by A.J. Walker at 2:10 AM 2 comments: 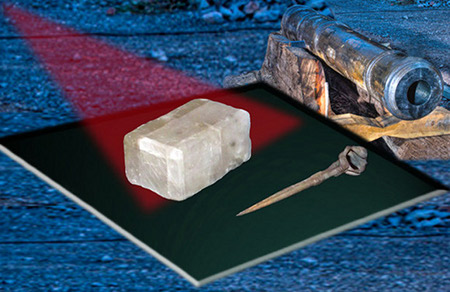 In a previous post I talked about the Viking sunstone, a legendary crystal that could detect the location of the Sun on cloudy days. This, of course, would be a boon to navigation in the age before GPS.

Sunstones are mentioned in some Viking sagas and historians have theorized they were double-refracting crystals such as cordierite, tourmaline, or calcite, which are common in Scandinavia. These crystals only allow light through them that's polarized in certain directions and thus appear darker or lighter depending on the polarization of the light behind it. While the Sun may be blocked by clouds, it's still sending out a concentration of polarized light that can be detected by the crystal as it's moved around.

But that's only a theory. No sunstone has ever been found. . .until now.

A team of French archaeologists studying artifacts from a British ship that sunk in 1592 found a rectangular block of Iceland spar calcite crystal, a type known for its double-refracting properties. The wreck was near Alderney island in the English Channel.

You can see the sunstone in this picture, next to a pair of dividers that may have been used for navigation. Both items were found close together in the wreck.

It's interesting that the sunstone was found on a ship dating centuries after the Viking era. It looks like these things were more popular than anyone ever suspected.

Author Sean McLachlan over at the Civil War Horror blog has an interesting post about how Chinese domain squatters have taken over his former website. Now his own blog is outranked by a Chinese real estate website using his personal name. Not fun!

He's asked the blogging community to help out by mentioning him on their blogs and hyperlinking his name to his blog like I did in the first line of this post. A writer deserves to be searchable by his own name!

Sean McLachlan is the author of the novel A Fine Likeness and a bunch of other books. He's guest posted a few times here, including one of the most popular posts for this blog on the accuracy of medieval handgonnes.
Posted by A.J. Walker at 8:30 AM 1 comment: 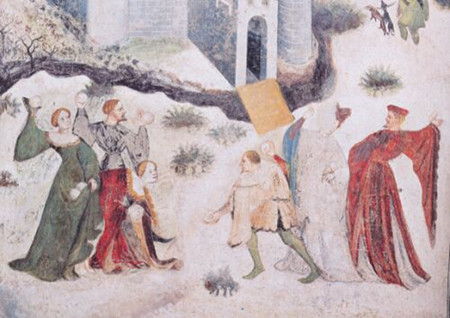 I love it when medieval art humanizes the distant past. This is a fresco on a wall in Buonconsiglio castle, Trento, Italy. It dates to about the year 1400. It's part of a series of paintings done by a Bohemian master called the "Cycle of the Months" showing the activities for each month.

As you can see, this is quite clearly a snowball fight! I wonder when the first snowball fight was? Did the Neanderthals chuck snowballs at each other?