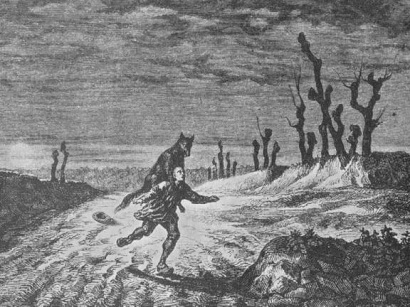 This is a reproduction of a cursing stone made in 1525. It's inscribed with a curse laid by the Archbishop of Glasgow on the heads of the Border Reivers, Scottish raiders who crossed the border into England to steal livestock. The curse runs more than a thousand words. Here's a sample:

"I curse their head and all the hairs of their head; I curse their face, their brain, their mouth, their nose, their tongue, their teeth, their forehead, their shoulders, their breast, their heart, their stomach, their back, their womb, their arms, their leggs, their hands, their feet, and every part of their body, from the top of their head to the soles of their feet, before and behind, within and without. . . May all the malevolent wishes and curses ever known, since the beginning of the world, to this hour, light on them. May the malediction of God, that fell upon Lucifer and all his fellows, that cast them from the high Heaven to the deep hell, light upon them. . ."

As scary as the curse is, it didn't work. Only a large English military presence eventually stopped to Reivers.

This isn't the only cursing stone in Europe. They come in all shapes and sizes and another has just been discovered. A so-called bullaun stone discovered on the Isle of Canna, Scotland, dates to about 800 AD. Bullaun stones are found all over the UK as well as France and as far away as Sweden and Lithuania. A bullaun is a natural or artificial depression in a stone that catches rainwater. The water is supposed to have magical properties. Sometimes a stone is placed in the hole. This is then turned as a prayer or curse is made.

The one on the Isle of Canna is a stone with a depression at the base of an early Christian cross. Recently a round stone carved with a cross was found that fits exactly into this depression. Check out the link above for more.
Posted by A.J. Walker at 3:51 AM 2 comments:

As I mentioned in a previous post, I'm preparing two more fantasy novels for publication. Hard Winter and At the Gates, books one and two of the Timeless Empire series, are edited and ready. The covers are being designed at the moment. The artist is incorporating some medieval art into the covers that really sets the mood. Both books will be released in June.

I'm still chugging away on The Maze of Mist, a sequel to my fantasy novel Roots Run Deep and the second book in the House of Itxaron trilogy. It will be out in late 2012. Each book in the trilogy is a standalone novel but can also be read as a series.

My third project involves fellow archaeologist and blogging buddy Sean McLachlan. We're working together on a collection of short stories tentatively titled The Witch Bottle and Other Tales of Black Magic. That will be out sometime this year but I can't be more precise than that. We both have busy schedules!
Posted by A.J. Walker at 1:25 AM 2 comments: 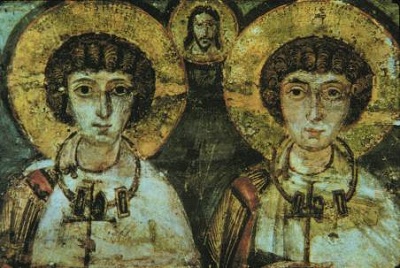 In the book The Marriage of Likeness: Same-Sex Unions in Pre-Modern Europe, gay Catholic historian named John Boswell proposed that the Church, far from considering homosexuality a sin, actually allowed same-sex unions. In a ritual called adelphopoiesis, literally "making a brother", two men would be joined in a spiritual bond. There would be a religious ceremony, the trading of gifts, a kiss, and a big feast with their friends. Boswell does not claim this was gay marriage, rather a same-sex union that was probably chaste.

Needless to say, this caused a firestorm of controversy both within academia and in the general population. While many of Boswell's detractors were simply having knee-jerk reactions, several leading historians criticized his methodology and convincingly argued that he stretched his interpretations too far.

Whatever the truth behind Boswell's claims, the fact of the matter was that there were gay people in the Middle Ages, and it would make sense that a lot of them would join the clergy. It was one of the only jobs in a traditional society that kept you from getting married. Everyone else was expected to marry and have children. Imagine a gay man faced with the requirement to perform on his wedding night. If he didn't, he'd be held up to public mockery and suspicion and would have given his wife one of the only grounds for annulment that existed at that time. Far better to take a job that put you in a big building with lots of other men! The Church also offered job security and took care of you when you were old, a better deal than most medieval workers got.

Now before anyone freaks out in the comments section, I'm not saying that all or even most priests and monks are gay. It stands to reason, though, that the Church was ironically one of the only refuges for gay people to avoid sleeping with the opposite sex and living a lie. It may be that the ritual of adelphopoiesis was a way to bond two men in a lifelong relationship that was superficially religious in nature, while everyone in the monastery was giving the pair a sly wink, knowing what was really going on.


Photo of saints Serge and Bacchus, who Boswell claims were a couple, courtesy Wikimedia Commons.
Posted by A.J. Walker at 2:13 AM 9 comments: