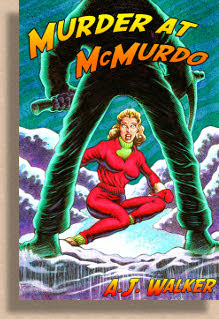 Mark Collins came to McMurdo Antarctic Research Station to study ice cores, cut down on drinking, and patch up his marriage to his wife Rachel. He’s failed. His equipment arrives broken, and he’s having an affair with Svetlana, a co-worker who drinks as much as he does. When Mark and Svetlana witness a murder and the wrong man gets blamed, they must solve the crime for themselves or reveal their affair to prove the man’s innocence. The only clue is an Alcoholics Anonymous token. Mark must infiltrate the station’s AA group, where he faces not only danger, but some hard truths about himself.

Svetlana's room was in a different dormitory than Mark and Rachel’s. Theirs was on the other side of McMurdo, Mark felt gratified to notice, while Svetlana’s stood right next to the observatory. A big minus. He’d have to keep track of Rachel’s observing schedule.

It was small and Spartan like the others, but Svetlana had decorated it with dried flowers she had painstakingly arranged, framed, and shipped down from Russia. Mark tried to examine them in the half light of the streetlamp filtering through the storm window. Svetlana had not turned on the light inside her room. Her slim figure was silhouetted by the window as she stood looking out. He went up behind her and gently put his arms around her. She trembled but didn’t pull away.

They stood in silence, enjoying each other’s warmth. After a minute she stopped trembling.

They saw a lone figure walked down the street towards the observatory. Even from a distance they could see the big Caltech logo on the back of the jacket.

“It must be that awful drunk professor from the bar,” Svetlana said.

“Could be one of his students.”

“Victor and Elaine? No, they have no logos on their parkas. I know them. They live just down the hall. They got in a big fight last night and woke me up. I think Elaine slept with her adviser sometime in the past.”

“That’s kind of what I figured.”

“They don’t try hard enough,” Mark hugged her tighter. She ran a hand up and down his forearm. She turned to him.

“But we can try,” she said, her eyes glittering in the yellow light of the streetlamp.

They kissed. Her body was warm and eager as his hands roved over it. They pulled at each other’s clothing hurriedly, desperately, falling to the bed interlocked and still half dressed. She took the initiative now, getting on top of him and discarding the rest of her clothes. He pulled her to him and the tension disappeared from his body for the first time in weeks as he felt the thrill of being close to another person. They made love hurriedly at first, but their second time went slow, as did the third, and Mark almost, just almost, caught that feeling he spent his life chasing.

After they finished, they lay silent for a while. Mark got up and looked out at the empty street, feeling spent, burnt out. The dome to the observatory was open. Cold stars shone over the little town. In the summer, Mark had read, McMurdo’s population numbered more than two thousand. Even tourists came here on safe, high-priced adventures with package tour companies. But in the winter the population dwindled to a couple hundred. By the end of the season he’d know everybody. It would be hard keeping this a secret. They couldn’t have many all-night drinking sessions at the Southern Exposure.

Mark watched a swaddled figure tromp through the snow towards their building. Just before reaching the door, it slipped and fell. The figure struggled to its feet and picked up something that had fallen from the pocket of its jacket. There was a gleam of metal and Mark saw an ice pick. The figure opened the door and entered the building.

Must be one of the maintenance guys coming to clean ice off from something. Odd time to be doing that, he thought.

“Come back to bed,” Svetlana whispered.

“Just for a little while.”

They lay together in the nude, Mark holding her close as her soft breath tickled his chest. He nodded off, jerked awake once when he thought he heard a sound, and then nodded off again.

Svetlana’s movement woke him up.

“Very late. You should get going. You will see me tomorrow, yes?”

He kissed her and got dressed.


Out in the street, all was snow and silence. In the sky the faint drapery of an aurora shimmered a pale green tinged with red, slowly coiling in on itself before expanding like a sail caught by the wind. Mark chuckled as he saw the big crater in the snow like a squashed snow angel. Good thing whoever it was who fell didn’t twist an ankle or something.

A spot in the snow made him look more closely. What was that? A coin?

He picked it up. It was a small plastic disk. He held it up to the streetlight and read the writing on it: One month clean and sober—to thine own self be true. An AA token. Mark snorted. Must be one of Victor’s. He may be “clean and sober” but he was still a klutz. Mark tossed it away into the night and immediately felt bad. It was a stupid little thing, but it was important to the guy. He set off to look for it.

Suddenly, the world spun upside down and he landed in the snow, creating a second crater next to the one he had been investigating.

Cursing to himself, he struggled to his feet. He must have slipped on the same patch of ice Victor had. Even cleated boots didn’t always help in this Godforsaken place. Mark realized he was still half asleep, way more than half drunk, and far from home on a frigid night. He gave up his search for the token. He needed to get to shelter.

He didn’t get more than twenty meters before he slipped again. He cursed louder than before and struggled back up. He moved carefully and got onto a shoveled path. The winds never kept them clear for long, but he could still see patches of concrete between the snow drifts. He made better time.

Mark stumbled along, getting colder. There seemed to be a breeze around his neck that soon turned into a biting cold. He reached back and realized his hood had slipped off. He’d been too drunk and tired to notice at first. He pulled it back over him and was adjusting the strings when he slipped on yet another patch of ice.

He pitched, skull-first, towards the pavement, sickeningly aware that he wasn’t going to get his hands out in front of him in time to break his fall.

Barely a foot away from the concrete, an arm caught him, his chest slamming into it like an iron beam, knocking the air out of him. Mark sucked in a breath as he felt himself being lifted up.

It was Victor. His uncovered face shone in the half light. The aurora sparkled in the sky above him.

“Careful, Mark. You wouldn’t want to die with a dirty heart.”

“Huh? Dude, get your balaclava on. It must be twenty below. You’ll get frostbite,” Mark’s words came out indistinct, mumbled.

Mark felt himself getting more and more tired, his eyelids heavy, his thoughts muddled. He let Victor carry most of his weight.

“I lost your token,” was the last thing he could remember saying.


Murder at McMurdo is available direct from LL-Publications, Amazon, Amazon UK, and Barnes and Noble.