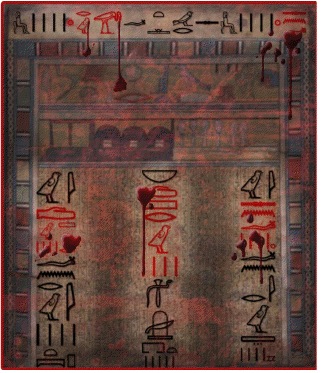 OK, Ancient Egypt isn't exactly medieval, but since I've already gone into the Early Modern period with my witch bottle post, I see no reason not to fall back in time too. It's a blog, not a site report! This guest post comes courtesy of fellow archaeologist and writer Jamie Gibbs.

If you look at almost any culture in the history of the world, you will find that there is some belief, religious or superstitious, that centres on the power and use of blood. Both the Ancient Greeks and the Cherokee tribe believed that menstrual blood flowed back into the womb during pregnancy, which both created and nourished the unborn foetus. It was also thought that the blood of a slain gladiator would cure epilepsy.

Despite the evidence that blood was believed to have been a useful and beneficial liquid, over the years it has become the stuff of taboo and is considered 'unclean'. The consumption of blood is expressly forbidden in the Old Testament: "Be sure you do not eat the blood, for the blood is the life, and you shall not eat the life with the flesh".

This taboo has continued throughout history until we get to the iconic image of those corrupt monsters who crave blood - the vampire. Our image of the modern vampire is very heavily based on the vampires of Eastern Europe, but the idea of vampirism extends farther back in history than is normally thought, back as far and Ancient Egypt.

Probably the most famous case of ' vampirism' in Ancient Egypt surrounds Sekhmet, the goddess of healing and pestilence. In a story known as The Destruction of Mankind, the human race plots against the sun god, Ra. In retaliation, Ra sends the goddess Hathor to lay waste to humanity. The instant that the blood touches her lips, Hathor is transformed into the bloodthirsty and aggressive Sekhmet, who slaughters so many that she wades in their blood up to her knees.

There is also evidence that ordinary Egyptians drank blood in order to increase their existence in the afterlife. In about 2000 BC, Egyptian coffins were inscribed with spells designed to help the deceased reach the afterlife and to protect them while they were there. One of these spells clearly expresses the desire for blood in order to 'keep them alive', "You devoured their hearts, so that you might live; you drank their blood, so that you might live"

This spell is similar to descriptions of predatory animals who live in the Egyptian desert, 'who eat hearts and drink blood'. This also links in with the story of Sekhmet who, with her leonine head, takes on the attributes of the predator.

Evidence of these beliefs go back as far as the pyramids themselves. Inscribed in the pyramid of the Pharaoh Unas (c. 2350 BC) are texts that show the king killing, cutting up, cooking and then eating people (it specifically notes that, in accordance with solar mythology, infants are consumed in the morning, adults in the afternoon and the elderly in the evening). Whilst these texts do not specifically mention that he drinks blood, it is implied so in that he is aided by the demon god Shezmu, who is both the butcher of damned souls in the afterlife and also the master of the wine press.

Shezmu is a fascinating character. In addition for being the Head Chef of the dead king, Shezmu is also responsible for certain punishments for those who do not live their lives in accordance with Egyptian morality. His job is to place bodies in his wine press in order to squeeze their blood from them, in which he then forces them to swim. Shezmu has sometimes been depicted with a leonine head, again emphasising the attributes of the predator that link in with the popular story of Sekhmet.

In all these instances, blood represents two things - life and power. The actions of the Egyptian 'vampires' were a form of dominance over others. To consume the blood of another was to increase your own power whilst at the same time robbing them of theirs. Egyptian vampires did not battle with their curse in an attempt to regain their soul. They did not seduce their prey in order to feed. They most certainly did not sparkle. If Ancient Egypt is anything to go by, vampires are meant to be predators, pure and simple.

Jamie Gibbs is a writer and Egyptologist, and has written two papers on the power of blood in Ancient Egypt: 'Wading Through Crimson Waters' and 'The Scarlet Essence'. He is also working on a fantasy novel that combines elements of vampire mythology throughout history. Visit him on his blog, Mithril Wisdom where he talks about fantasy in literature and the media, as well as writing in the genre.
Posted by A.J. Walker at 3:17 AM