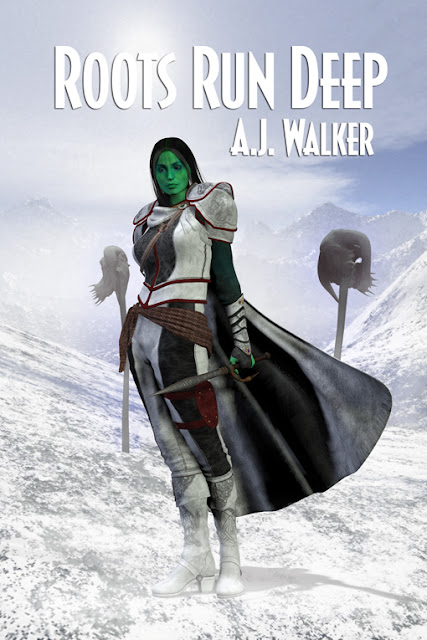 When a small-time goblin gambler falls in love with a deposed human king, the least of her worries is his vengeful usurper. Kip Itxaron has to follow religious visions despite having lost her faith, unite her squabbling people, find the fabled Lost Tribe of Goblinkin, overcome her fear of battle, and somehow be a leader to a people who have never had one.

But that’s nothing compared with loving someone who reminds her of every man she’s ever hated. Human men can barely be called male. Pasty skin, weak bodies. . .they don’t even have tusks! Not to mention that when he was in power he treated her people just as badly as the rest of them. Kip can see he’s changed, but has he changed enough? Can she change enough?


EXCERPT FROM CHAPTER ONE

Kip Itxaron trudged down Rain Street, wending her way around the dirty puddles and heaps of animal droppings. The young goblin gazed absently at the ragged people who struggled along the muddy lane, its sides lined with shabby storefronts. A hobgoblin pushed a cart piled with rags while his wife scoured the gutters, occasionally stooping to pick up a shred of cloth and adding it to the load. A group of kids sat on a front step smoking dreamweed. Under a patched tarpaulin, two old women served up steaming bowls of mule meat soup to a crowd of hobgoblin laborers. The hulky men, their rough skin a duskier hue of green than the women’s and caked with dirt, eagerly slurped their lunch, licking their tusks with relish.

Kip’s stomach grumbled; she hadn’t eaten since the day before. She tightened her belt and kept walking.

Rain Street was the main thoroughfare through the center of the Goblin Reservation. At its eastern end, on the summit of a rocky hill on which grew only briars and a few stunted trees, stood the palace of Queen Tegla Ezti IV, nominal ruler of the Eight Tribes, but really just a puppet of the human King. The palace’s cracked walls and overgrown battlements stood as mute testimony to the poverty and degeneration of the ramshackle town.

From the palace, Rain Street ran downhill through a compact cluster of thatched huts, shacks, and tents housing nearly fifty thousand goblinkin. Human law dictated that the goblinkin had to live within the few square miles of wasteland of the Reservation, a half-hour walk from Vancian, the human capital. The Reservation’s lone town took up part of the area, but beyond the crowded buildings and refuse-filled alleyways, Rain Street ran through rocky fields where a few goblinkin families struggled to work the barren soil or hacked granite out of a large quarry. Continuing to the west, the street, now little more than a dirt path, wound through low hills before linking up with the royal highway, a major road that ran along the river before terminating at Vancian’s heavily guarded city gate.

But Kip was going to none of these places; she wasn’t going anywhere. As she passed the crude hovels and market stalls, she felt the small bag of coins hidden beneath her tunic. She didn’t have to look to know how much she had-eight copper pennies and a silver half-mark. Enough to eat for the rest of the week, assuming she ate one meal a day.

For the hundredth time, she went over the numbers in her head. Her rent at The Cradle and Coffin, a mark every other week for a pile of dirty straw under a leaky roof, wasn’t due for another ten days, long enough that she didn’t need to worry about it now. But she still owed Ballick, the smelly old human bookie, seven pennies. Ballick was a serious problem. She was already late on her payment, and she had seen what he and his crew did to gamblers who didn’t pay. Luckily, no human, not even Ballick, would dare come onto the Reservation without a small army. As long as she didn’t leave, she’d be safe. But if she wanted to find work, she had to go to Vancian. And there was still the problem of how she would eat next week.

Caught up in her thoughts, she didn’t notice the goblin standing in her path until she ran right into her.

"Excuse me," Kip muttered, hand straying to her money pouch to check it was still there.

When Kip glanced at the woman she smiled. Pink makeup caked the goblin’s face, hiding her naturally green complexion under a cheap imitation of human skin. She had dyed her hair from the goblinkin’s characteristic black to a ridiculous shade of blonde. Bangles crowded her wrists, and a gaudy necklace hung around her neck, its thin veneer of gold wash already flaking off. Her shoes had ridiculously thick soles in a failed attempt to bring her up to the height of a human woman.

Kip took another look at the goblin’s face. Those sharp features, those hard eyes belying that easy smile. . .she had a flash of recognition.

"Prenta! I haven’t seen you in ages!"

As kids, they had run in the same gang together, filching goods from merchant’s wagons and sneaking into farmers’ fields at night to steal food. As they matured, they started running shipments of dreamweed from Vancian’s docks onto the Reservation. Their human boss took most of the profit, but their commission was enough to keep food on their table and money in their pockets.

Then one night, a deal went sour and they had to fight their way out. Kip had to kill two people to survive. One was just a human rogue, but the other was a goblin. The look on the woman’s face as she cut her down remained burned in Kip’s memory.

Kip shoved those unpleasant thoughts aside and hugged her friend.

"Thank you," Prenta smiled, cocking her head coyly to one side and trying to stand taller, but only managing a precarious wobble. "I try to keep up with the latest fashions."

Kip put a hand over her smile, trying to suppress a chuckle and failing.

"Don’t use that word! Just because some goblins try to look their best doesn’t mean we’ve forgotten who we are."

Kip stopped laughing. No, Prenta hadn’t forgotten who she was. It probably ate at her insides every time she looked in a mirror. No amount of overpriced makeup could hide those wide cheekbones and flat nose, although she had seen some gumans who had taken razors to their face to make them look more human. Kip thanked her ancestors that Prenta hadn’t become that desperate.

"Sorry," Kip muttered, then quickly changed the subject. "So how have you been doing?"

After the fight Kip had turned her back on criminal life and apprenticed herself to a mage. Prenta went to work for one of their tribe’s sub-chieftains, a mid-level crime boss.

"Yeah, you look like you could use some work. Actually, I’ve been trying to find you. The boss needs a job done, and I think you’ll be interested. She could use someone with your skills."

The goblin looked around before leaning closer to Kip.

"I can’t really tell you what it’s all about here in the open," she whispered, "but a cousin of yours got herself in a jam. The boss wants to help her out."

Kip tensed. She knew which cousin it was without having to be told-Nekane, the daughter of her eldest aunt. While Kip and Prenta were still stealing apples from orchards, Nekane had already graduated to banditry. She was moody, unpredictable, often violent, but always good to Kip and her friends, buying them food and helping out when their parents got behind on rent. Nekane was a hooligan, but she was family, the only thing most goblinkin could truly call their own.