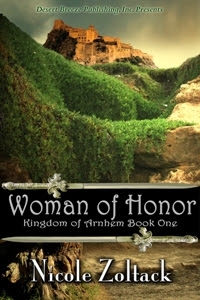 Today we have a guest post from fantasy romance author Nicole Zoltack, who is working on a trilogy starring (you guessed it!) a female knight. Check out her website for lots of information on the Middle Ages.

When you think of knights, you imagine a tall young man wearing armor on the back of a noble steed. Although most knights were male, there were some female knights in the Middle Ages. Some wore armor, others commanded troops, some were members of an Order.

One female knight to wear full armor into battle was the Duchess Gaita of Lombardy, who rode beside her Norman mercenary husband. Another was Petronilla, Countess of Leicester. Wearing a mail hauberk with a sword and a shield, she defended her lands from Henry II of England. She and her husband participated in the rebellion in 1173 against Henry.

In 1149, the men in the city of Catalonia had been called away. The Moors knew this and attacked the supposedly defenseless town. The women defended the town and forced the Moors away. Raymond Berenger founded the Oder of the Hatchet. Although the women were not called knights (they were called dames), the women were granted many rights that only privileged men had during the Middle Ages, including exemption from taxes. The Order most likely died out with its original members and the women most likely never saw combat again, but if they had never taken up weapons against their enemies, the town of Tortosa would have fallen, and instead of being given privileges, their lives may well have ended in slavery or even death.

The House of Dudley's coat of arms is of a woman with long hair wearing a helmet. The woman is based on Agnes Hotot. Her father had a disagreement with another man and they agreed to settle the matter over lances. But her father grew ill, and Agnes disguised herself and took his place on the field. After she unseated her foe, Agnes removed her helmet to show her hair and showed her chest so he would know he had been bested by a female.

Agnes wasn't the only woman to compete in tourneys. Many noble ladies hunted with hounds or hawks. Women, on occasion, pretended to be men to partake in tourneys, as Agnes had, and some, it's believed, even fought in the crusades.

The most famous female knight of all was Joan of Arc. At seventeen, she remains the youngest person in history to command a nation's army. Patay was her greatest military victory on June 18, 1429. More than 2,000 English knights were killed while few of the French died. Twice Joan suffered injuries on the battlefield, but she remained with her men on the field.

Female knights fought for honor, freedom, and their land. They fought with the determination and heart of knights. Whether known as dames or knights, these brave women are a source of inspiration for us all.

Learning about the Order of the Hatchet inspired me to write Woman of Honor, about Aislinn and her journey to knighthood.

Aislinn of Bairbhe dreams of becoming a lady knight to honor the death of her fallen brother. To her mother's horror, King Patrick grants Aislinn's wish and she begins her long years of training.

Despite the mockery of the other pages, and the disdain of Prince Caelan who also trains to be a knight, Aislinn commits herself to her dreams and embarks on a journey of self-discovery and bravery. Through the years, Aislinn and Caelan grow from sparring classmates to good friends. They both know that someday Caelan will marry for the sake of the kingdom, but even that cannot keep them from falling in love.

The threat of war with the Speicans is a constant threat, and one that grows more frightening as she and Caelan train toward their eventual knighthood. Aislinn has committed herself to serving Arnhem, and has promised herself as King's Champion when Caelan claims the throne. She is willing to give up everything... her childhood, her life, even her heart for Arnhem. No matter the pain it brings.

Be sure to leave a comment to be entered to win some signed postcards and magnets. Each comment during the Champion of Valor Blog Tour gives you an entry for the grand prize: a copy of the entire Kingdom of Arnhem trilogy - Woman of Honor, Knight of Glory, and Champion of Valor. 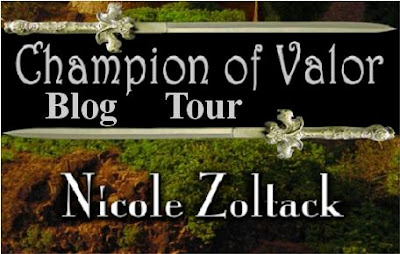