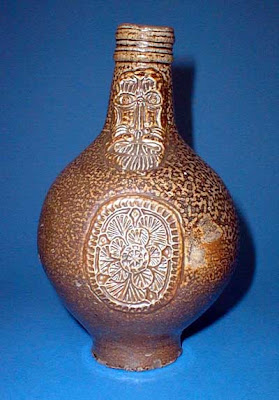 The folklore of England is filled with odd spells and strange objects. My personal favorite are the so-called witch bottles.

Witch bottles date to at least the 17th century and were used until the early 20th. Folklore recipes and stories tell us the bottles were filled with various "magical" substances and buried under thresholds to keep witches away from the house.

They could also lift curses. If someone was sick and you suspected a curse, you'd make a witch bottle and hold it over the fire. The witch would feel the flames until he or she ended the curse. If the witch was able to tough it out long enough, the bottle would burst and the witch won.

Another variant on the witch bottle theme was to use them to capture witches. The Pitt-Rivers Museum in Oxford has a witch bottle with the witch supposedly still inside! Reminds me a bit of the Cajun tradition of hanging bottles from trees near the house to catch wandering spirits.

I know of only one that's been found with the contents intact. It was reported in the July/August 2009 issue of British Archaeology. A 17th century bellarmine jar like the one pictured here in this Wikimedia Commons photo was found upside down in a pit by workmen in Greenwich. It was still corked and a chemist investigated the contents. These included: human urine, 12 iron nails, a bent nail through a bit of leather, 8 brass pins, hair, a bit of fluff the investigator thinks came from a belly button (!), and ten fingernail shavings from a man who had recently had a manicure.

The fingernail shavings, hair, and naval fluff probably came from the person the bottle was supposed to protect, since folklore spells usually required a personal possession or a bit of the body to work.

I have an idea for a witch bottle story fluttering around in the back of my head. I'll have to write it someday!
Posted by A.J. Walker at 2:02 AM