Medieval Mondays: How the Irish Didn't Save Civilization 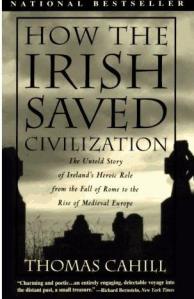 A friend of mine has been reading How the Irish Saved Civilization by Thomas Cahill. He asked me about it so I’m going to talk about it here. This book came out back in the Eighties and was an instant bestseller. Lots of Irish-Americans liked the idea that the Irish saved civilization.

Unfortunately, this book is full of holes. It’s wonderfully written and has some interesting details about life in early medieval Ireland, but its central thesis that Irish monks preserved civilization through the Dark Ages simply isn’t true.

First off, Cahill's’s concept of civilization is limited to Greek and Roman texts. Yes, Irish monks did preserve a large amount of Classical literature, poetry, drama, and political writings, but does that constitute "civilization"? They certainly didn’t save Roman technology! And what about all the other civilizations like, um, China?

Also, the Irish weren’t the only people preserving these texts. The Byzantine Empire, which was the eastern half of the Roman Empire that survived in an ever-shrinking form until 1453, also preserved Classical learning. Byzantium is often overlooked in European history classes, and Cahill overlooks it here. Then there were the Jewish and Muslim scholars in North Africa and the Middle East who translated Classical texts into Hebrew and Arabic and wrote commentaries on them, not to mention creating a lot of literature and science in their own right.