Medieval handgonnes: how accurate were they? 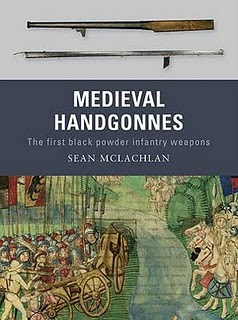 Today I'm happy to host a very special guest blogger, Sean McLachlan, who has not only authored eight books, but also has a blog about his writing life called Mid-list Writer. His latest book is about the world's first rifles. While he does today's Medieval Mondays feature over here, I'm writing about leather armour at his blog. Take it away Sean!

We often hear that medieval guns were crude, inaccurate, and generally ineffective. One common mantra is that they were more dangerous to the wielder than the target. Yet one has to ask, why did armies across Europe incorporate them into their arsenals starting in the 14th century and keep using them until they eventually replaced the longbow and crossbow? Obviously early firearms had something to offer. But what?

When I started researching my book Medieval Handgonnes: The First Black Powder Infantry Weapons, I was shocked that there was no other book written in English on the development of the gun before the matchlock. I found no books in any other language either. Guns are, after all, one of the most important inventions to come out of the Middle Ages. Until very recently historians just accepted the image of crude early handgonnes without testing it or even really thinking about it. While this made my research extra difficult, it also made it extra rewarding.


When I say "handgonne" I mean a handheld black powder weapon fired with a match or hot wire. There was no trigger, no automatic firing. Pretty primitive stuff! "Handgonne" was only one of many terms used in that era.

In recent years reenactors and archaeologists have experimented with medieval recipes for gunpowder and tested replicas handgonnes. They've found these weapons could punch through armor better than a longbow or crossbow, although they have a much shorter effective range. Scholars have long debated how effective a longbow arrow is against plate armor. Many believe arrows had more of a harassing effect, with lucky shots getting into eyeslits, joints, or hitting horses. The escape velocity of the bullet was higher, making it more effective, but since it wasn't as aerodynamic as an arrow it lost velocity pretty quickly. Accuracy was better than people assume. Skilled reenactors can hit a man-sized target most of the time even at 45 meters (49 yards). Since men generally fought in large, compact masses, this made them even easier to hit.

Of course longbows and crossbows had better range, speed, and accuracy. In medieval illustrations you often see bowmen and gonners standing together. This capitalized on the advantages of both weapons while negating the disadvantages. As the enemy advanced they were harassed by the bowmen and when they got in close got cut down by the gonners.

Handgonnes truly came into their own in the 15th century, as improvements in gunpowder production made them more powerful and cheaper. Soon the ratio of guns to bows tilted in favor of the gun. While crossbows and the English longbow lasted on the battlefield for some time, the development of the matchlock in the late 15th century heralded a new era in warfare.
Posted by A.J. Walker at 4:59 AM