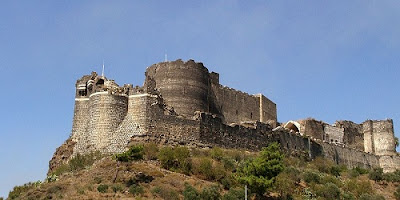 As the final stop on my virtual book tour, I'm over at the Double Dragon Publishing blog talking about the Order of St. Lazarus, a group of leper Crusaders. I figured I'd give you a gallery of Crusader castles this week.

The Europeans learned much of their castle building during the Crusades. The Arabs were much more advanced in defensive architecture but the Crusaders proved to be quick learners. The photo above is of Marqab castle in Syria, courtesy of Shayno. That promontory it's set on is actually an extinct volcano, and makes for a natural defense. The walls aren't too shabby either! Even Saladin wasn't able to take it. 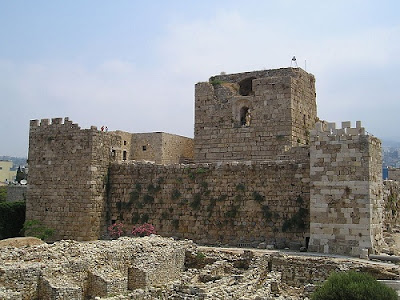 This chunky example is from Byblos in Lebanon, photo courtesy Heretiq. Saladin took this one in the same year, 1188, that he failed to take Marqab castle. 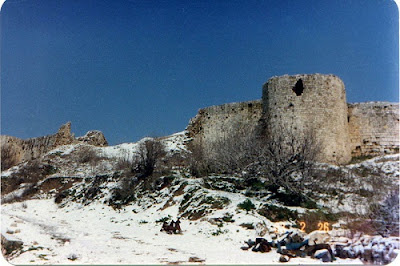 I love this old photo of Tebnine Castle in Lebanon. Note the rounded corner and digital readout on the lower right corner. T. Dakroub took this shot who-knows-when and really captures the atmosphere. Yes, it snows in the highlands of the Middle East! 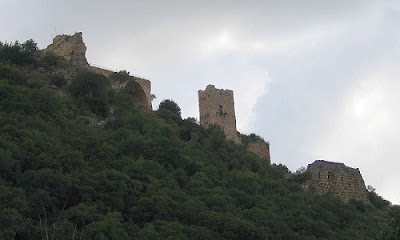 Another well located castle is Montfort in Israel, as this shot by Bukvoed shows.The name in French means "strong mountain." 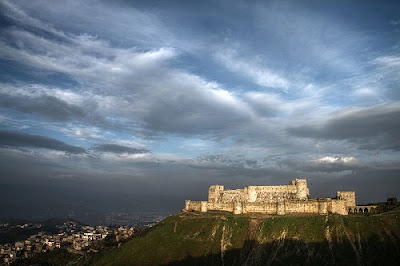 And how could I skip Krak des Chevaliers in Syria, the biggest and best preserved Crusader castle of them all! I've visited this castle myself but none of my photos capture it as well as Ed Brambley did. Like Marqab castle, Krak des Chevaliers was originally an Arab castle taken and expanded by the Crusaders. It served as the headquarters of the Knights Hospitaller.
Posted by A.J. Walker at 8:02 AM