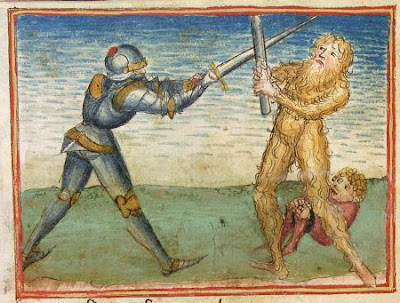 Medieval folklore is filled with monsters, from dragons to unicorns to goblins. One enduring creature is the wild man. This fellow is generally depicted as unclothed, covered in hair, of immense strength, and living on the edge of human habitation. He (and sometimes she) appears frequently in illuminated manuscripts, heraldry, and even coins. Some wild men are shown as giants, another favorite creature of the medieval bestiary. 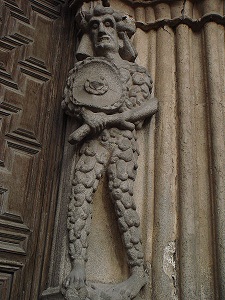 Medieval Europeans were fascinated by what anthropologists call "liminal zones", areas crossing from one state of existence to another, in this case from civilization to wilderness. There was a lot of wilderness in medieval Europe, and since most people didn't travel, this wilderness was looked upon with wonder and fear. Who knew what might be living in that primeval forest? At the edge of human habitation there certainly were some strange people: bandits, hermits, madmen, so perhaps there were monsters too.

Medieval society was a strict and hierarchical one. Everyone had their place and they better stick to it. In the more rural areas, though, the church and state had less of an iron grip, and people could get away with more. Time and again in the historical record there are reports of rural people engaging in rituals that look like pagan survivals or revivals. These were dangerous but exciting, and medieval people looked upon these remote regions with a guilty thrill. The wild man is a projection of this. 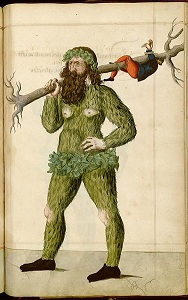 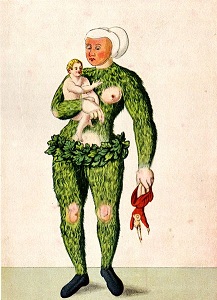 Images of wild men are so frequent that some have argued that they may have been real. Some say there may have been primitive tribes living in the more remote regions, or even surviving Neanderthals. There's no evidence for this. I think there probably were a few wild men, people who left society either by choice or by force, who lived a semi-wild life in the woods, wearing uncured pelts as clothing. They may have been a danger to farmers living on the edge of civilization, stealing livestock or women and children as is often depicted in wild men imagery. In the weird, wonderful world of the Middle Ages, it's not unlikely.

[All images courtesy Wikimedia Commons]
Posted by A.J. Walker at 1:17 AM 14 comments:

I got a nice review of my fantasy novel Roots Run Deep over at Croft Fantasy reads.
Go check it out!

You can also judge the book for yourself by nabbing it at Amazon or Double Dragon Publishing.
Posted by A.J. Walker at 9:01 AM 2 comments:

Medieval Mondays: the ball and chain, my favorite medieval weapon 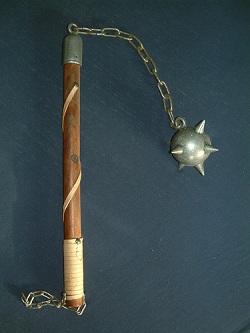 Here are a couple of images of a ball and chain, my favorite medieval weapon. Many people incorrectly call this a morning star, but that weapon is a straight stick with spikes on the end of it. I'm not sure where the confusion came from, but I suspect Dungeons and Dragons may be the culprit.

A ball and chain is a type of flail, and there are many variations, from the typical grain threshing flail used with deadly intent, to this fearsome weapon.

I wouldn't want to face this thing in battle. It looks scary, and my shield would do little good. All someone has to do is hit the shield with the handle, and the ball whips around and smack! While it wouldn't do much good against plate armour with padding underneath, most regular warriors had chain mail or even leather armour, which would have left them vulnerable to blunt trauma and puncture attacks.

Not much is known about this particular weapon. We know it was widespread. The image below is from Russia and I've seen examples here in England, but we don't know when they were first introduced and when they died out. Perhaps someone needs to do an academic treatise on the ball and chain!

Another question is why weren't these weapons more common? My personal theory is that they were difficult to learn how to use, especially with the limited visibility of most medieval helmets. Also, you couldn't use it in tight formation without fear of hitting your friends. Thirdly, you can't parry very well. Like many elaborate weapons, they look cool but in the end the simpler weapons like swords, axes, and maces worked better. Still, there's a soft spot in my heart for the old ball and chain. . . 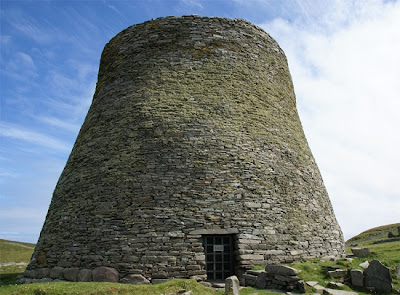 One of the enduring mysteries of Scottish archaeology are brochs. More than 500 of these drystone towers dot the Scottish landscape. Most are in the north, or in the Shetland and Orkney Islands, and hug the waterways or shorelines. Some archaeologists say they're forts, others say they're the homes of the elite. Some contend that they're communal homes.

The name comes from the Lowland Scots words brough and the Old Norse borg, both of which mean "fort". That and the general feel of these places makes me think they were defensive structures, although that doesn't preclude their use for other functions. Castles in the High Middle Ages, for example, were for protection, living, and a way to show social status.

The best preserved is the Broch of Mousa in Shetland, shown above. It dates to about 100 BC and still stands 44 ft. (13 m) high. The internal staircase is preserved all the way to the top and you're allowed to climb it! It went through many phases of use and some Vikings even lived here centuries later in the Middle Ages.

For a better view of how a broch was constructed, check out the picture of Dun Carloway on the Isle of Lewis, shown below. Like Mousa, it was built in the first century BC and inhabited for many centuries, as late as 1300 AD in this case. 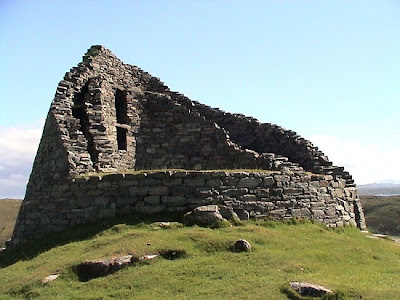 Whatever their use, they are some of the most impressively built prehistoric structures in Europe and add an air of mystery and beauty to the Scottish landscape.

Sorry Medieval Mondays is coming to you on a Tuesday this week, but Ive been having connectivity issues with my ISP. Hopefully that's all straightened out now. All, the troubles of the modern world!
Posted by A.J. Walker at 2:31 AM 4 comments: 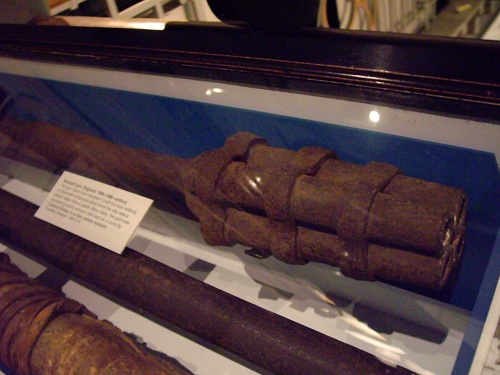 Today we have another guest post by military historian Sean McLachlan, who wrote a previous post on his research on the accuracy of medieval firearms. Today he's talking about some interesting items he found in the Pitt-Rivers Museum in Oxford.

The Pitt-Rivers is my favorite museum. It is literally stuffed with items from every culture in the world and every period in history, organized not by time and place but by use. In the photo above you can see an early attempt at a "revolver", a four-barreled handgonne! As I mentioned in my previous guest post on medieval firearms, a handgonne was the earliest form of black powder gun, being lit by a burning cord called a slow match instead of any sort of trigger mechanism. They appeared in the 14th century. 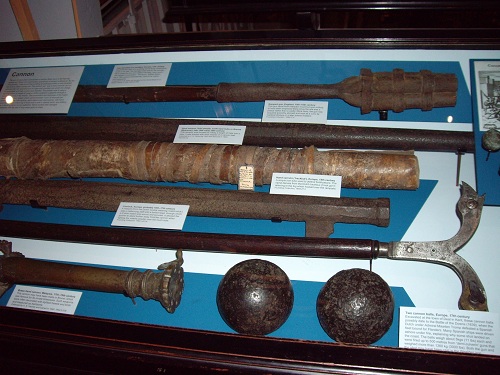 It was an age of experimentation in many technologies and firearms were no exception. Several multi-barreled handgonnes survive and they were obviously an attempt to compensate for the handgonne's slow reloading speed. They are a small minority of all handgonnes, though, so apparently they were considered too unwieldy. Perhaps the lack of a single, straight barrel reduced the already poor accuracy.
In the above shot you can see another view of the four-barreled handgonne; a large handgonne just below it still being used in Burma in the 19th century; a leather cannon from Manipur, India, below that; and than a typical "hackbut" type of handgonne below that. The hackbut was especially popular in the Low Countries and came with a hook for bracing against a wall, mantlet, or other object. The other objects are later. 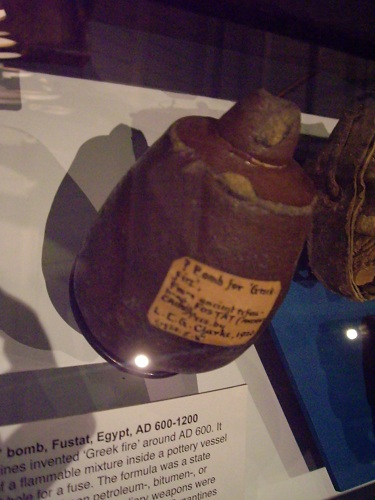 And here you have a medieval hand grenade! This one is Byzantine and used their most famous weapon--Greek Fire. The recipe for Greek Fire is lost but it seems to have been a sort of early napalm. This ceramic jar was filled with Greek Fire and had a lit slow match as a fuse. too bad I didn't have this shot when I wrote my history of the Byzantine Empire! Other grenades survive from the Middle Ages too, and contained gunpowder.
Posted by A.J. Walker at 8:40 AM 1 comment: