The Red and White Springs of Glastonbury 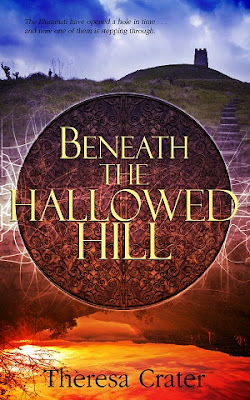 Today we have an interesting guest post by Theresa Crater, who writes urban fantasy and mysteries, and teaches writing, British literature, and meditation.

My Power Places series starts in Egypt with Under the Stone Paw. Egypt is filled with mythological sites—as is Glastonbury, the location of the second book in the series, Beneath the Hallowed Hill. The Tor and the twin springs form the center of much of the mythology of ancient Avalon.

Red Spring, or Blood Spring as it is sometimes called, is now the centerpiece of Chalice Well Gardens, a beautiful, peaceful site well worth several visits. No one is certain where the water rises from—perhaps from the Mendip Hills or beyond, or it could be from deep within the earth.

Whatever its source, Red Spring carries a lot of iron, creating the red color. Most followers of the Old Tradition see Red Spring as the blood of the Mother Earth, giving to us healing and vision. Indeed, next to the well shaft is a polygonal chamber which many think was used by the Druids for initiation rituals.

Christians have claimed the well began to run when Joseph of Arimathea buried the Holy Grail below Chalice Hill. The spring to them is the blood of Christ. Today people come to this well to meditate, pray, and ask for guidance and healing. Many hang prayer ties in the trees surrounding the well, so many that the Chalice Well keepers are hard pressed to keep up with them. They also have in their possession a blue cup that many claim is the grail itself.

White Spring is the sister of Red Spring, just across a stone wall and Well House Lane. Now housed in a stone building that I’ve been told used to be a restaurant, the building was built by the Victorians to provide clean water during a cholera outbreak. The public protested the destruction of the natural wells and lime encrusted areas the natural flow of White Spring had created. For a time, White Spring was almost unnoticed compared to her more famous sister, but now thanks to Glastonbury residents, it has been refurbished and made into a temple. White Spring belongs to Brigid, the Celtic fire goddess who is guardian of sacred springs. Later, she became a Christian saint.

The water of White Spring is filled with calcium from the abundant limestone in the area. It flows from what were caves and tunnels deep in the Tor. The water is clear and tastes wonderful. It is said to bring healing and all the powers of Brigid—poetic eloquence, wisdom, smithery skills, and healing abilities. In Beneath the Hallowed Hill, several characters follow the tunnels into deep, magical caverns beneath the Tor—and even into the land of the Fae where they encounter Gwyn ap Nudd, King of the Faeries.
Posted by A.J. Walker at 6:10 AM