Murder at McMurdo now available on the Kindle! 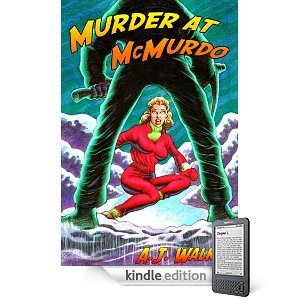 My Antarctic mystery/thriller Murder at McMurdo is now available in the Kindle store!

Mark Collins came to McMurdo Antarctic Research Station to study ice cores, cut down on drinking, and patch up his marriage to his wife Rachel. He’s failed on all counts. His equipment arrives broken, and he’s having an affair with Svetlana, a coworker who drinks as much as he does. When Mark and Svetlana witness a murder and the wrong man gets blamed, they must either solve the crime themselves, or reveal their affair to the entire camp in order to prove the suspect’s innocence. The only clue is an Alcoholics Anonymous token. Mark must infiltrate the station’s AA group, where he faces not only danger, but hard truths about himself.

It just went up today and somebody's already bought it. Whoever you are, you are my new best friend!
Posted by A.J. Walker at 9:07 AM