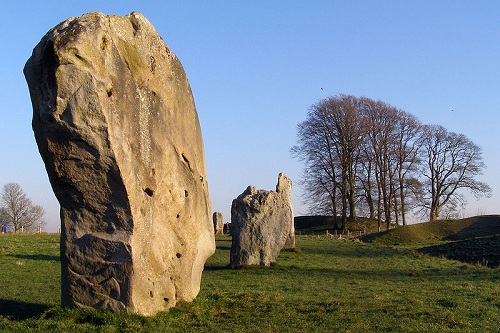 Sometimes truth is weirder than fiction.

Avebury has always been one of my favorites of the thousand or so stone circles of the British Isles. Fellow author and former archaeologist Sean McLachlan of Mid-List Writer fame has published a detailed article on Avebury so I won't repeat the information here. Basically it's the biggest stone circle from the Neolithic Period. Actually it's a whole complex of stone circles, giant standing stones, and associated monuments.

The locals in the Middle Ages didn't like it. Around the 14th century they got religion, more religion than the usually religious medieval peasants. These early Born-Agains decided to destroy the stones and knocked down several of them. One, however, ended up falling on one of the vandals! He wasn't discovered until the stone was excavated in 1938. The stone was put back in place and the bones were sent off to be studied.

What's interesting about the skeleton was that it had a pair of scissors and a medical-style metal probe. This led the archaeologists to identify him as a barber-surgeon. In the days before NHS, barbers often doubled as surgeons, doing simple operations like lancing boils and setting broken limbs. Researchers have suggested he was involved in the vandalism because barber-surgeons were considered somewhat magical, like blacksmiths, and that his presence would have helped protect the vandals. Fat lot of good it did!

Interestingly, the skeleton has been reexamined and there's no evidence he was crushed to death. Perhaps he got pinned under the stone as it was lowered down in the pit and his friends couldn't get him out. Another possibility is that he was deliberately buried under the stone because the villagers didn't want him on hallowed ground for some reason. Pinning a body is a common way to keep the dead from returning. Perhaps he was considered a bit too magical?

This is what I love about archaeology. All the possibilities. . .

Thanks to Jim Champion for the photo. The barber-surgeon was found under the stone on the left.
Posted by A.J. Walker at 4:07 AM