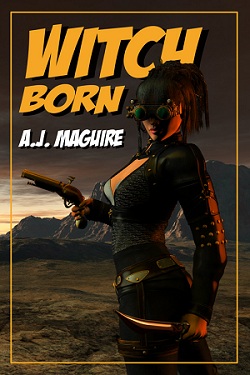 Today we have a guest post from A.J. Maguire, a fellow Double Dragon author.

Color me geeky, but I loved the video game Arcanum. In fact, when I was world-building for Witch-Born, I did a little tip of the hat to the game when I named the world “Magnellum”. It was originally going to be called Magnella, but in a purely capricious mood I changed it to add the “-um” at the end. If you’ve ever seen the game, you know the general feel, where magic and steam-generated technology are at odds. While I loved this concept, what I loved more was the steampunk involved and the fun details that came from it.

When I first set out to write Witch-Born, I became frustrated because I didn’t want to make a replica of the world of Dyngannon, which was the setting of my first novel, Sedition.  A very patient friend of mine, who always listens when I start ranting about writing frustrations--even though he's never written a novel and never will--challenged me to make Witch-Born a steampunk world. I’d never tried that before, so I took the challenge.

Because I was writing Witch-Born for the National Novel Writing Month in 2008, I took all of October to outline the book and play with world-building and research. For those unfamiliar with steampunk, a very basic explanation is that you take modern technology and swap it with steam power. Jared, the friend who issued the steampunk challenged, laid out specific items that I had to put in. Firstly, there needed to be a train. Locomotives are the essence of steam-powered technology, and thus I had to have one in my book.

Chugga-chugga-Easy, I even put a depot in the first chapter.

Then he said there had to be a lot of brass and copper. (Yes, he really was that vague.) And at this point I sort of gave up on his directives and started researching steampunk myself. The first place I went (and the first place I always go when I’m researching something) was How Stuff Works.com. It’s an eclectic compendium of information to just about everything imaginable. They even have podcasts. Personally, I’m looking forward to listening to the “How Shrunken Heads Work” podcast.

How Stuff Works threw me several specific directions. At first, “steampunk” was used to define any author of speculative fiction who based their world on an alternate 19th Century Earth. More specifically, an Earth where technology is defined more by iron and copper and metals, rather than the plastic contraptions we have in stock today. Nowadays, steampunk is a style and an art form. A good example is Wild, Wild West. You see the steam-powered, iron spider crawling through the desert, or the steam-aided wheelchair. But if you want to get really specific, read The Difference Engine by William Gibson and Bruce Sterling. By the time you’re done reading that, you’ll have a feel for what steampunk means.

By the time November hit, I had a boat load of information and research that I absolutely could not get through.  Because you have to write 50 thousand words in the thirty days of November in order to win National Novel Writing Month, I had all of this information in a file on my computer that I accessed only when I got really stuck.

Can they have a steam-powered generator? (Dive into the file and look.)

Good lord, he’s dressed like a dandy, is that right? (Eyeball several pictures in the file.)

I’m happy to say that I did actually win National Novel Writing Month that year, but the greater portion of my research came about during the editing process. I made the mistake of making the main character a seamstress, which I knew nothing about, and ended up with double the research just to make sure the girl didn’t mismatch colors or use the wrong kind of fabric. Although it was a fictional world, I didn’t want to make some egregious error that would have a real seamstress grouching at me.

That being said, Witch-Born is a fantasy with steampunk flavor. I don’t go into the “how’s” of the way the pieces work and I don’t really elaborate on a lot of them. The reason being, is that the point of view characters who were in the book were primarily the race known as “witch-born” and these magically inclined people can’t fully understand the technology around them. They don’t hate it, in fact they appreciate it, but if you asked them how the gears worked in a clock they couldn’t tell you. There is a sequel currently in the works where I have point of view characters that are not “witch-born”, so I’m getting to play more with the research still sitting in my hard drive.
Posted by A.J. Walker at 7:13 AM