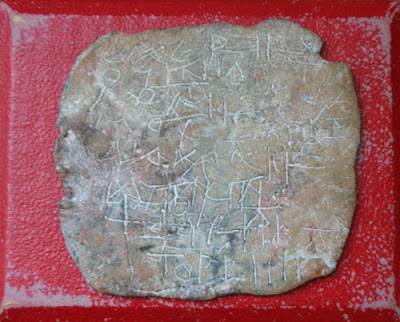 It's time once again for Medieval Mondays, and like with the popular Vampirism in Ancient Egypt and Witch Bottle posts, we've wandered away from the Middle Ages. Ah well. perhaps I should call these posts Archaeological Mondays, but then I'd lose the alliteration. Today's post is by author Christina St. Clair and is about ancient curse tablets.

Tabulae defixiones are curse tablets. They were widely used in Ancient Greece and Rome. In Greek they were called katadesmoi and in Latin defixiones. From the time of Clement of Alexandria in 200 C.E. scholars thought gods needed to be addressed in ways more powerful than mere human language. Thus, invocations, secret names, and secret languages were etched into the tablet.

The tablet, often made of thin lead, because that was cheap, easy to shape, and long-lasting, was then nailed with an iron nail into a wall or floor or somewhere near the intended victim. The iron nail wasn't merely to fasten the plate, but to increase suffering.

Some defixiones contained blank spaces. Archaeologists believe these particular ones were made by professionals and sold to clients who could then fill in the name of their intended recipient.
The defixione at the beginning of my novel, Emily's Shadow, is a mysterious spell. The unknown words bakakab aka! tababak! are intended to be voces mysticae, unrecognizable harsh language meant to gain power over the intended victim: Merlin.