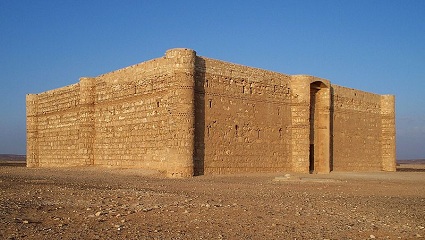 I was blanking on what to write about for this week's Medieval Mondays post until I saw this photo as the image of the day on Wikimedia Commons. It shows the desert castle of Qasr Kharana in Jordan.

This is one of the oldest Arab castles in the Middle East, having been built around 710, according to an inscription in one of the rooms. As any student of the Middle Ages knows, the Crusaders were impressed by Middle Eastern castles and were inspired to make thier own in Europe. There had been castles in Europe before the Crusades of course, but most were crude forts like the Motte and Bailey castles.

Qasr Kharana may be better called a fortified place rather than a castle. Some say it may have been a caravanserai or the stronghold of a local ruler. Nobody knows for sure.

The plan is simple: a square 115 feet to a side with a series of small round projecting towers. Some sixty rooms in two stories look onto an interior courtyard. This layout is similar to the typical caravanserai but Qasr Kharana isn't on any known early medieval trade route. On the other hand, many wealthy homes also had this layout.

Some researchers suggest that Qasr Kharana was only inhabited on a temporary basis. They point to the small cistern and the absence of a bath (de rigueur for wealhty medieval Arabs) as proof that it wasn't inhabited year-round. It may have been a governor's temporary abode while meeting with and collecting tribute from the Bedouin.
Posted by A.J. Walker at 7:26 AM