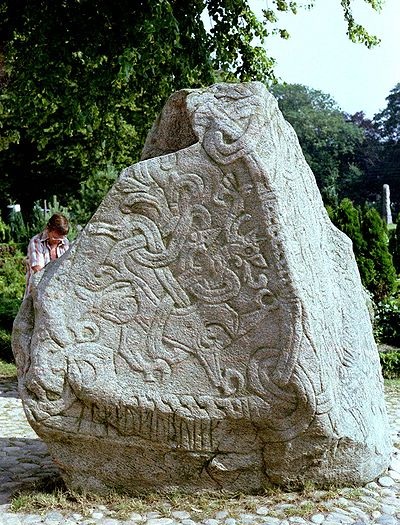 A new excavation is pushing back the date for the introduction of Christianity among the Vikings.

Archaeologists working at Ribe Cathedral in Denmark have found Christian burials from the mid ninth century in the graveyard. They all faced east and had no grave goods in keeping with Christian tradition. Viking burials almost always included grave goods and generally did not face east.

Traditional history says that the Vikings in the area were converted after King Harold Blutooth was baptized in 963. On his famous Jellinge Runestone, shown here, the king boasted that he "made the Danes Christians”. Some historians have contended that he was only making official a slow process of conversion that had started long before. These graves seem to confirm that, and bring up the question of whether there's the foundations of an older church underneath the cathedral at Ribe.

Sorry for my recent silence, but I've been busyworking on the latest book in the Timeless Empire series. I've even put a word counter on the sidebar to keep me motivated! Book One, Hard Winter, is already available, and Book Two, At the Gates, is being prepared for publication. It should be availabe in the next two weeks.

Photo courtesy Sven Rosborn.
Posted by A.J. Walker at 8:25 AM