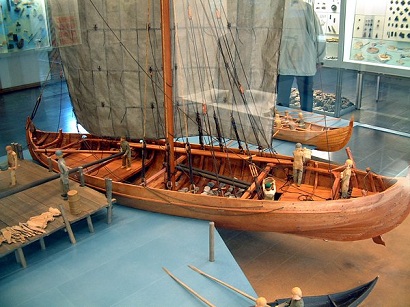 The Vikings were some of the greatest shipbuilders of the premodern world. A lot of people don't realize, however, that the famous longship was only used for raiding and warfare. It was too narrow to safely take across the open ocean and would quickly swamp in heavy seas. Norsemen hugged the coasts with their longships when they went a-Viking.

So what boat did they use for their famous voyages to Iceland, Greenland, and Vinland (North America)? This one. It's called a knörr. Like all Viking ships it was clinker-built, meaning of overlapping oaken planks lashed together to naturally curved timber and fastened with iron rivets. Fitted with a square sail and a side rudder called a steer-board (hence the name starboard), they could carry up to 40 tons of cargo. they could be up to 60 feet long and carried a crew of 15-20 people.

Since knorrir didn't have much of a keel and the steer-board could be taken up, they could sail in as little as five feet of water and be run onto a beach. They had very little draft and thus bobbed along the surface of the ocean. It was also somewhat flexible, giving in heavy seas. This kept the hull from cracking.

Several reproductions have been made and modern sailors are universal in their praise of the knörr's seaworthiness. in 1932, a knörr called the Roald Amundsen after the Arctic explorer sailed one of the routes used by Columbus to the New World and made it there in only 2/3 the time it took Columbus! It was then sailed from Newfoundland to Norway.

The Vikings were smart with more than just shipbuilding; they were expert navigators too. They used a special crystal called a sun stone to determine the position of the sun on overcast days.


Photo courtesy Wikipedia.
Posted by A.J. Walker at 6:27 AM