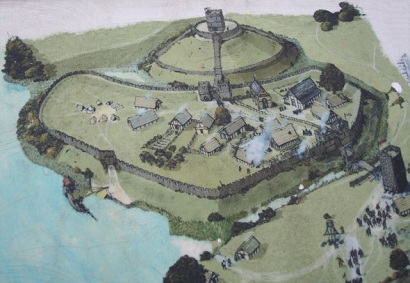 I've always been fond of motte-and-bailey castles. Perhaps that's because I've always been fascinated with the origins of things, like the world's oldest condom. Familiar to any student of the Middle Ages, these rough and ready fortifications provided a cheap and quick way to defend your territory.

For those who aren't as obsessed with castles as I am, a motte-and-bailey castle is an artificial mound (motte) with a keep and wall on top, and a lower enclosed area (bailey) surrounded by a wall. Both parts are surrounded by a ditch, the soil of which was used to make the Motte. An artist's rendering of one can been seen in the above photo courtesy Duncan Grey.

These castles had the advantage of being able to be built by unskilled labor in a matter of months or even weeks, as opposed to stone castles that required highly skilled artisans working for years. The most famous are those of the Normans, who needed lots of quick castles as they expanded through the British Isles. 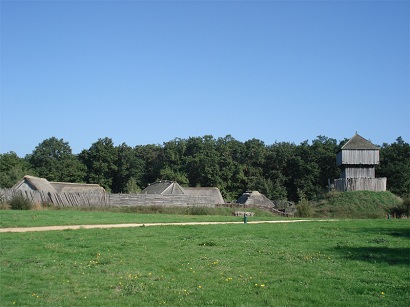 Trolling through the Interwebs the other day I discovered that in at least two places there are reconstructions of motte-and-bailey castles. The one pictured above is Saint Sylvain d'Anjou dans le Maine et Loire, France. The photo is courtesy Wikipedia. The bottom one is from Turmhügelburg in Nienthal von Lütjenburg, northern Germany, and is also courtesy Wikipedia. 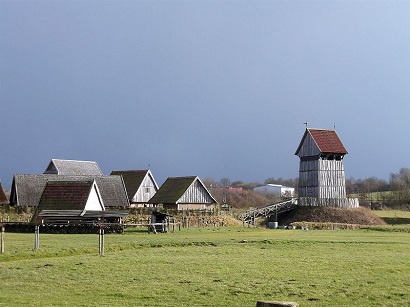 As you can see, neither has a very high motte. This was common, although we tend to think of them having very tall mottes, perhaps because the taller examples have survived better and were often maintained and had stone keeps built atop them at later periods. Windsor castle in England is the most famous example.

While they don't look like much, you must remember that the heyday for these castles was the late 10th through early 12th centuries AD. Siege technology was at a low ebb in Northern Europe, armies were small, and feudal levies wouldn't hang around long enough to commit to an extended siege. Thus the humble motte-and-bailey castle was a formidable defense.
Posted by A.J. Walker at 6:07 AM