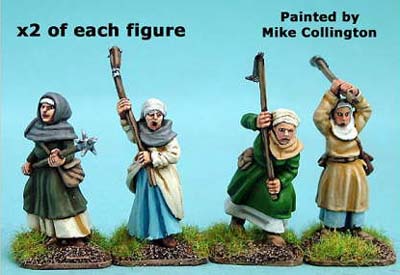 Last week I talked about Hussite war wagons, which a couple of readers pointed out were essentially medieval tanks. Another curious aspect of the Hussite peasant army was that many of the fighters were women.

This is a cover shot of some Hussite figures distributed by Kingmaker Miniatures. It shows burly peasant women wielding flails. Normally used for threshing grain, they were just as effective at threshing skulls. Records show that women were involved in all aspects of the rebellion, although they were generally left out of pictorial depictions.

A recent BBC article also talks about the role of women in the 1381 Peasant's Revolt. It turns out some of the main leaders were women. This was not mentioned or downplayed by contemporary chroniclers and thus the fact was missed by later scholars. Now new studies of the trials of captured rebels show that a good number were women. Check out the link to learn more.

Women had a strong role in medieval peasant society and were treated by men as near equals in many areas. This was not the case between middle- and upper-class men and women.
Posted by A.J. Walker at 6:28 AM