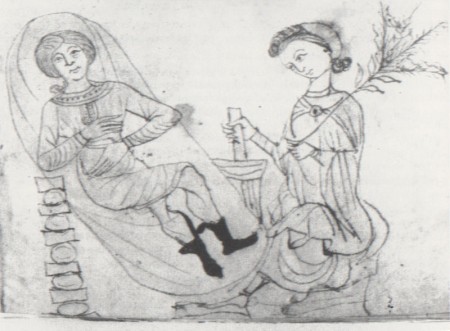 While abortion has been considered a sin by the Catholic Church for many centuries, the history of the Church's views on it aren't completely straightforward. A new article in the Journal of the the History of Sexuality tackles the unusual topic of saints who performed abortions.

All four saints--Ciarán of Saigir, Áed mac Bricc, Cainnech of Aghaboe, and Brigid of Kildare--lived in the fifth and sixth centuries but like other saints, tales of their deeds survived long after that.

Saint Ciarán helped out a nun who had been raped by the local king: “Ciarán, despising the enormity of such a crime and wishing to apply a cure, went to the house of sacrilege to seek the girl from there. . .Then the man of God, led by the zeal of justice, not wishing the serpent’s seed to quicken, pressed down on her womb with the sign of the cross and forced her womb to be emptied.”

The other saints' stories are similar. An interesting detail is that in later versions of this tale, Saint Ciarán only blessed the nun's womb. The act of pressing down on it (a primitive and dangerous abortion technique) was left out.

Callan hasn't found any evidence for abortionist saints in other medieval cultures. It would be interesting if other scholars probed deeper into the hagiographies of their regions to see if any similar stories exist.
Posted by A.J. Walker at 4:08 AM