Medieval Mondays: Mass grave from the Battle of Lützen being excavated 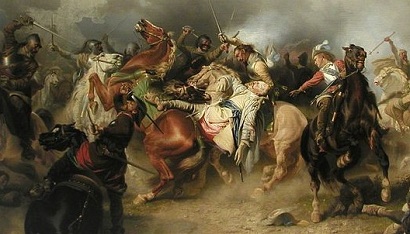 Archaeologists are excavating a mass grave from the Battle of Lützen, a 1632 battle in Germany that was a turning point in the Thirty Years War.

The team has found an estimated 75 skeletons, all male and apparently stripped since no artifacts or traces of clothing have been found. The bones will be analyzed to find cause of death, health, and age. Isotope analysis will determine where they originated from. At the moment it is unknown which army the grave represents.

The Battle of Lützen was fought between the Protestant army of Sweden under the famous general Gustavus Adolphus and the Catholic army of the Holy Roman Empire. It was unusual in several ways, the first being that it was fought in November, when most Renaissance armies preferred to be in winter quarters.

It was also unusual in that the Protestants won the battle and lost in the long term. After a hard fight they broke the Catholic army, which fled in partial disorder. Gustavus Adolphus, however, was cut down by Catholic cavalry and with his genius for leadership and strategy gone, the Protestant cause lost much of the wind from its sails. Sweden lost its prime place in the Protestant coalition, although the war ended in the Protestants' favor.
Posted by A.J. Walker at 10:47 AM