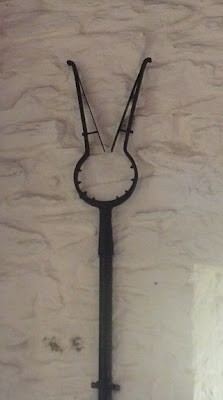 Here's one for all you fantasy romance fans. This unusual looking polearm is called a man-catcher. It's not so much a weapon as a rather nasty police enforcement tool.

A quick jab would catch someone in the spring action and the spikes would discourage them from moving around.This would be very effective for catching criminals without killing them. It would certainly hurt them, but curbing police brutality was even less of a priority in the Middle Ages than it is now. While it would have been of little use against armored targets in a battlefield situation, it would prove effective in pulling a rider off his horse.

This type of weapon was long lived. There are examples from the Middle Ages (although like the flail, its origins are unclear), the Venetian police used a type of man-catcher in the Renaissance with hinged blades, and police in New Guinea used a rather nasty type right into the twentieth century.

The New Guinea example was a loop of rattan with a spike at the end of the pole. The loop would go around the fleeing culprit's neck, and a quick jerk brought his neck up against the spike. A strong enough pull would save a lot of paperwork back at the station.

Photo courtesy Jeremy Hunsinger.
Posted by A.J. Walker at 1:43 AM